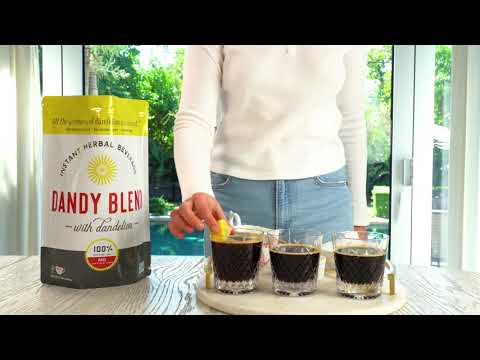 2 sold in last 8 hours
Dandy Blend
DBCS25
In stock
$19.99
Dandy Blend It tastes remarkably like a rich, full-bodied cup of coffee, no brewing, dissolves instantly in hot or cold liquid.It is caffeine free, and has no acidity...
customers are viewing this product
Description

It tastes remarkably like a rich, full-bodied cup of coffee, no brewing, dissolves instantly in hot or cold liquid.
It is caffeine free, and has no acidity or bitterness. It is the only herbal coffee substitute in the US that features both the health benefits of dandelion root and the rich, full-bodied flavor, smoothness and texture of real coffee. Many say that, because it lacks bitterness and acidity, it actually tastes better than coffee.

It is made of water-soluble extracts of roasted roots of dandelion, chicory and beets, and the grains of barley and rye. Nothing else is added. While we make no claims for Dandy Blend other than that it is a delicious herbal beverage with the taste, body, and texture of coffee, the ingredients – dandelion, chicory and beet roots, and barley and rye grains – are all health-promoting foods respected throughout the world.

It contains no gluten. Gluten, which is comprised of proteins that are not water-soluble, is left behind in the grounds to be composted during the extracting process, leaving Dandy Blend gluten-free.
The sweetness some perceive in Dandy Blend is primarily from the fructose that occurs naturally in the roots of dandelion and chicory. Many people require no additional sweeteners.

It contains over 50 trace minerals in each cup, most of which the body uses to help synthesize compounds needed in metabolism.
There are no headaches or other withdrawal symptoms when switching from coffee to Dandy Blend. It is like switching from one brand of coffee to another. Most people generally can’t tell that they aren’t drinking coffee.

On top of all this, Dandy Blend costs as little as 7 cents a cup – less, on a per cup basis, than coffee, or instant coffee alternatives that do not contain dandelion. To keep
Dandelion root is what makes Dandy Blend unique and so much better that it stands out from all other options available. Dandelion may be considered a nuisance plant, but to people all over the world it is valued and a highly respected herbal medicine. It is one of the top six herbs in the Chinese medicine chest. If your doctor or health practitioner has recommended that you give up coffee, and/or add dandelion to your diet, Dandy Blend is by far the easiest way to do that AND still continue enjoying the flavor and texture of a good “cuppa joe” at the same time.

Dissolves instantly in hot or cold liquid. Drink as often as desired throughout the day. If you experience more energy when drinking it, you may want to avoid drinking it before bedtime. Enjoy it hot or cold, and in combination with spices, milk/dairy alternative, and ice-cream or frozen yogurt, for gourmet-style herbal goodness.

Product is sensitive to moisture. Be sure to re-seal any opened packages tightly after use, and store in a cool, dry place.